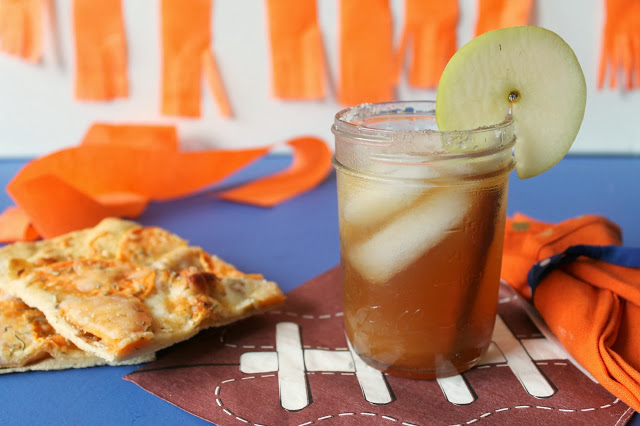 Our resident foodie – Dianna of The Kitchen Prep – has spoiled us with Strawberry-Lime Mojitos and Cuban Black Bean Dip and Champagne Cookies and Cocktails, but this month we are drooling over her latest culinary creations for one of our favorite fall pastimes, tailgating! And just when we thought we couldn’t love her more, she tells us she is a Gator, too! No matter what team you are rooting for, these recipes will surely be a huge hit for the next big game! Dianna, you’re up!
Has fall arrived where you live?
It’s trickling in here… bit by bit. Except, of course, for the unfaltering 80+ degree weather in steamy South Florida.
I joke around every year and tell my Northern friends that the only signal we Floridians get that autumn has arrived is the addition of seasonal scents at Bath & Body Works and the return of Starbucks’ Pumpkin Spice Lattes.
I suppose there could be worse things in the world than living in perpetual summer weather. 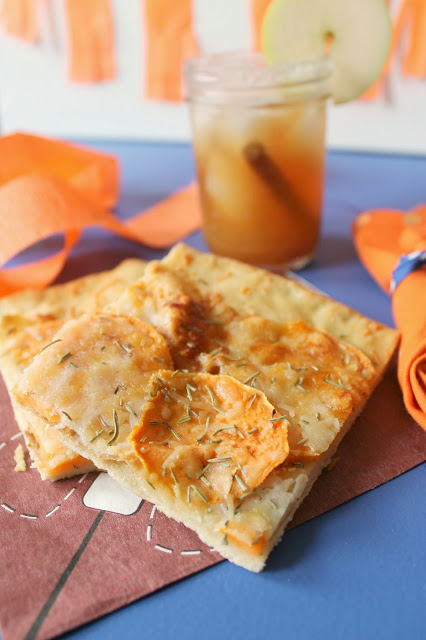 Once the craft stores start carrying Halloween supplies and the grocery store end caps begin to look like altars to the pumpkin gods, something within me yearns for fall — whether or not I’m still able to wear shorts and flip-flops.
Fall is synonymous with football in my world. As a proud University of Florida grad {Go Gators!}, part of my education was dedicated to becoming indoctrinated in football tradition.
While I couldn’t care less about most other teams, you can bet that I can be found watching myteam every given Saturday. There’s just something about starting the day with College GameDay, gathering with friends {or spending the day on the couch}, donning my team colors, and yelling at the TV ‘til the neighbors start to get concerned. 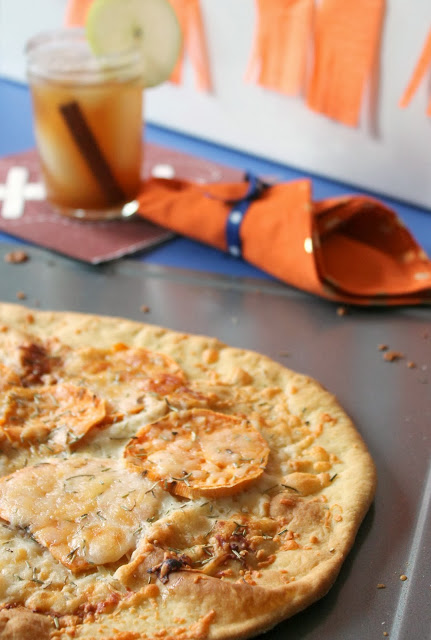 Tailgate food may also have a tiny bit to do with my love for football season.
It’s an excuse to eat all kinds of deliciousness for the sake of the game.
Last year, I even dedicated a series of posts to game day eats. Each “Tailgate Thursday” post contained a themed snack {or two}, a cocktail, and an outfit all coordinated to go with different SEC teams. I condensed the posts into a round up for easy browsing here, in case you’re curious if your team made the cut. 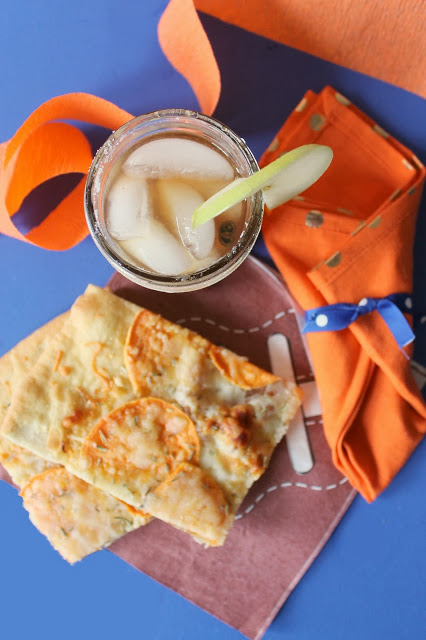 But for today… I’m going to stick with what I know. An orange and blue tailgate it is!
This Sweet Potato, Fontina, and Pecorino Flatbread with Rosemary & Honey is a snack that no one will be able to turn down. Sweet and savory, it’s bound to become a favorite for game days {or any day}! If the boys turn up their noses at it because it’s so pretty, they’ll be missing out. You, on the other hand, will be happy there’s more for the girls! 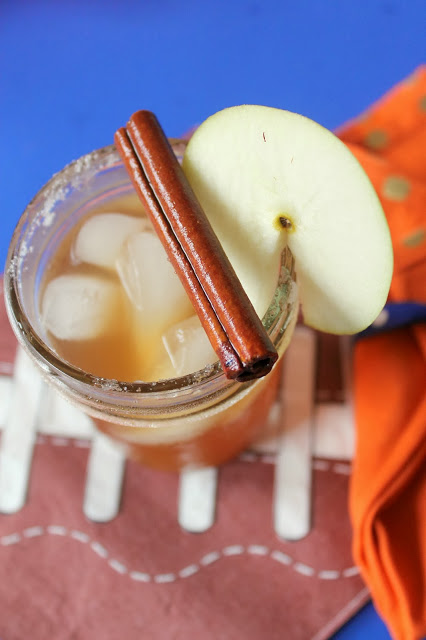 The flavors of fall shine through in this amazing Apple Pie Bourbon Sweet Tea Cocktail! I know, it’s a mouthful… but it’s worth every syllable. Spiced apple cider syrup lends a sweet and familiar taste to this twist on sweet tea. Don’t be fooled… this baby packs a punch with the addition of bourbon! {Not a drinker? No worries! Just sub out the bourbon for some extra apple cider.} 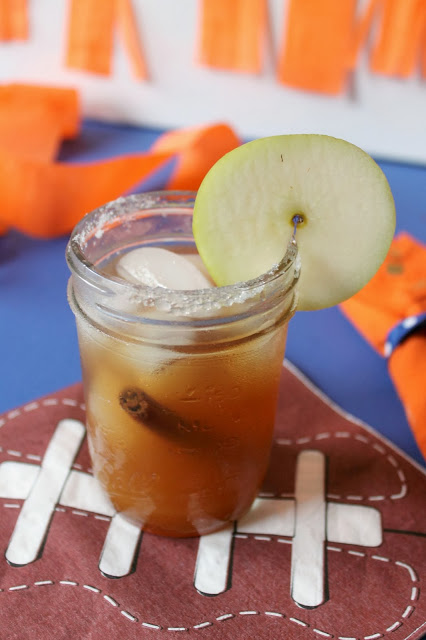 Whoever you root for, I hope your game day is filled with food and fun! Go Team!

Thanks, Dianna! That duo looks mmm mmm, good. To try her recipes, click “read more” below!

Makes 2 Flatbreads
1 lb. store bought pizza dough at room temperature {Or make your own. I used this recipe}
1 small sweet potato, sliced into very thin rounds {you probably won’t use up the whole thing}
1 cup favorite specialty cheese blend OR
½ cup Fontina cheese + ½ cup Pecorino cheese
1 teaspoon dry rosemary or 2 teaspoons fresh
About 1 ½ teaspoons honey
1.     Preheat the oven to 450 degrees with pan or pizza stone in the oven.
2.     Separate dough in half. Sprinkle surface where you will be rolling out the dough with flour. Roll out one ball of dough as thin as possible. {It’s important for the dough not to be cold from the refrigerator because it will snap back to where you started when you’re rolling it out. Room temperature dough is much easier to work with!}
3.     Carefully remove hot pan or stone from the oven and arrange rolled out dough on it. Spray or brush with olive oil. Prick the dough all over with a fork. {This will help prevent big air bubbles.}  Bake on the bottom rack for about 8 minutes or until it is starting to brown in spots.
4.     Remove from oven and place a few pieces of sliced sweet potato on the crust. Sprinkle with cheese, then top with remaining sweet potato slices.
5.     Sprinkle rosemary over top and drizzle with honey.
6.     Reduce the oven temperature to 375. Bake the flatbread for about 7 minutes or until the cheese is melted and the sweet potatoes are cooked {they’ll start to curl up and brown around the edges}.
*If you’re making both flatbreads, repeat the process with the second ball of dough. Otherwise wrap the remaining dough in plastic wrap and refrigerate for up to a day more or freeze for up to a week.
Cut into pieces and serve warm.
Apple Pie Bourbon Sweet Tea Cocktail
Adapted from Southern Living, Makes 2 cocktails
2 tablespoons “Apple Pie Syrup” {see recipe below}
3 ounces bourbon {or apple cider}
1 ½ cups unsweet tea
2 teaspoons fresh lemon juice
Club soda
{Optional for garnish} 2 slices of apple, 2 cinnamon sticks
1.     Combine all ingredients except club soda in a cocktail shaker.
2.     Pour into 2 glasses filled with ice. Top off with club soda.
3.     Garnish with a slice of apple and a cinnamon stick, if desired.
For “Apple Pie Syrup”
1 cup apple cider
½ cup water
1 tablespoon sugar
1 cinnamon stick
¼ teaspoon nutmeg
1/8  teaspoon ground ginger
1.     In a small sauce pan, combine all ingredients and bring to a boil over high heat.
2.     Boil for 8-10 minutes or until liquid is reduced by about half.
3.     Remove from heat and cool completely.
*You will have more than you need for 2 cocktails.
Categories: cocktails | fall | food | living